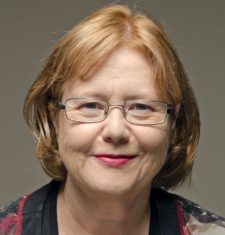 Professor Anne Wallace is Associate Head of School at La Trobe Law School. Her research focuses on judicial administration, including court safety, visual evidence in trials, technology in courts and the impact of social media on the work of courts.

I have taught in both Law and Justice Studies programs, in subject areas including Criminal Law & Procedure, Evidence Law, Forensic Evidence & Law and Issues in Justice Administration. I have served as an Adjunct Professor in the University of Denver’s Sturm College of Law Masters of Legal Studies program, where I taught the subject Court Technology. I am also currently an Adjunct Professor with the Sir Zelman Cowan Centre at Victoria University in Melbourne.

From 1993 to 2006 I was the Deputy Executive Director for the Australasian Institute of Judicial Administration (‘AIJA’), and in that role I developed a research interest in the field of judicial administration. I have been researching the development and implementation of information and communications technology (ICT) in Australian courts and tribunals since 1998. I have been a Chief Investigator in two multi-disciplinary research projects under the Court of the Future Network (led by Professor David Tait, of Western Sydney University), and funded by the Australian Research Council, that investigated the use of technology in the justice system; one examining the effect of interactive visual evidence on juries, the other to establish best practice guidelines for the use of remote witness testimony in courts. I have also researched in a number of other fields related to judicial administration, including court safety, judicial workload allocation and the impact of social media on the work of courts.

At the AIJA, I managed a 10-year project to provide cultural awareness training for the judiciary in relation to indigenous issues. I was subsequently engaged by the National Judicial College of Australia to develop a curriculum outline for another program relating to indigenous issues in the justice system and am a member of the College’s Indigenous Issues Committee.

I have served as a visiting foreign expert for a judicial training program conducted by the Central and East European Law Initiative (CEELI) Institute in Prague in November 1996 for judiciary from a number of Eastern European countries. I have also served as a faculty member for the International Association for Court Administration and am currently a member of the editorial board for its international journal.

Prior to moving to academic roles, I was a Principal Legal Officer in charge of Prosecutions and Civil Litigation with the Office of the Australian Government Solicitor in Hobart. I joined that office in 1983 and worked in a variety of legal roles, spending over 9 years in prosecutions and civil litigation. I am admitted to practice to the Supreme Court of Tasmania, and the High Court of Australia.